Geographic modes of speciation in nature

Speciation is the evolutionary creation of new biological species. Genetic drift is assumed as a minor or major contributor to this process.


The four modes of speciation 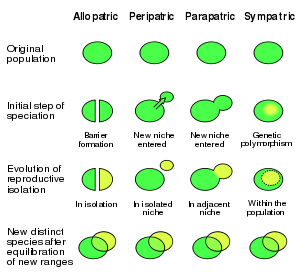 Through animal husbandry or experiments the speciation process can be induced artificially. The genetic variation between species is the main concept of speciation.

Genetic difference must be there in two incipient species, and they are expressed occasionally. It may cause no mating between them or failure matings. Big genetic differences are not necessary. A minute change in the location or the process of mating could also make a difference. But definitely there must be some difference. This variation might evolve by genetic drift or selection. Gene flow reduction is the major part of speciation.

Reduced gene flow probably plays a critical role in speciation. The 4 geographic modes of speciation are divided according to the species separation and the decrease in gene flow.

It is a speciation by geographic isolation. Some extrinsic restricts the organisms from regular mating and cause lineage to speciation. Allopatric speciation can even occur through minute pores in the barriers. The individual organisms can seep through it and mate with other individuals.

It is a subdivision of allopatric speciation. Formed new species are separated as a new small group. These smaller groups are restricted from gene exchange with the original population. It is more or less like founder effect. Smaller populations face the bottle necks.  Genetic drift is has a major role in this speciation.

Two diverging populations are partially separated geographically. Individual organisms can contact with the habitats.  It restricts their inter-breeding and constant variations occur and it is absolutely a source for natural selection.

Ecologists refer to parapatric and peripatric speciation in terms of the ecological niches which are available for successful new species.

Species like insects diverge while inhabiting the same place and become dependent on various host plants in the same area.

Domesticated animal husbandry plays an important role in the creation of new species.

Distinct phenotype occurrence is possible if different species gets hybridized.