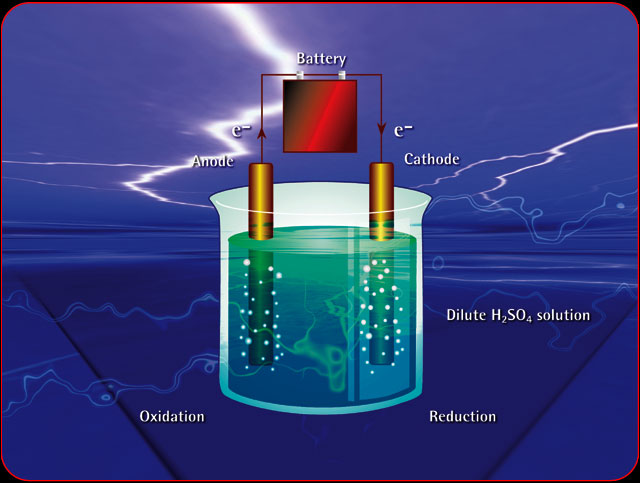 The laws of electrolysis emerged from Faraday's work on the chemical reaction that is produced when an electric current passes through a liquid. Michael Faraday, perhaps the greatest experimental scientist in history, enunciated his laws of electrolysis in 1833, and these laws have remained unchallenged ever since. They are basic to both the understanding and the practical use of electrolytic processes. They may be stated as follows:

The first law states that the amount of chemical change produced by a current is proportional to the quantity of electricity passed, i.e., equal currents produce equal amounts of decomposition.

The second law states that the quantities of substances liberated or deposited on the electrode by the passage of a given quantity of electricity (current) are proportional to the chemical equivalent weights of those substances.

Description of the laws

In his research, Faraday used a electrolytic cell with some solution inside. In the solution, he assumed the subsistence of some N number of atoms of some element. Each of those particles had the same mass m and the positive charge q. Next he assumed that the passage of the whole electric charge through the electrolyte was transferred only by those atoms. During the passage of current, Nx number of those atoms would be collected at the negative electrode.

The mass of the electrodeposits Mx would be equal:

The whole charge passage Q through that electrolyte would also be equal:

Dividing the first formula by the second one we get:

Mx can then be calculated from it. It is equal to:

The mass m of the element can be shown as the product of that element's atomic weight and the constant d equal to 1/12th of the carbon's atomic weight:

We can also assume that the charge q of the particle is the product of that element's valence number and some elementary charge q0:

The whole charge passage Q through the electrolyte is also the product of the current intensity I and the time of current passage t:

So the formula no.4 listed above:

is now in the following shape:

One of the formula's elements d/0 is constant. So let's name it F:

The inference is that the mass of the electro deposit should equal the product of the current intensity I, the time of current passage t, some constant F and the division of the element's atomic weight by its valence number.

The experiment affirmed that. So when the subsistence of some elementary portion of charge was assumed, the theory was in agreement with the experiment.

Want to know more about Faraday’s law of Electrolysis? Click here to schedule a live session with an eAge eTutor!