Polarization is a property of waves of light or other sources of radiation whose oscillations are restricted in certain directions. A light beam with wave oscillations occurring in a single plane of space is said to have total plane polarization. Light with an equal amount of oscillations in all directions and no preferred orientation is unpolarized. Unlike light, sound waves vibrate back and forth along their directions of propagation and thus are not polarizable.

Polarization is constant when waves hold a particular orientation at all times. Alternatively, polarization can rotate with each wave cycle.

Light emitted by the sun, by a lamp in a classroom, or by a candle flame is unpolarized light. Such light waves are created by electric charges that vibrate in various directions, and therefore create electromagnetic waves that also vibrate with no preferred orientation. The concept of unpolarized light can be rather hard to visualize.

The plane containing an electric vector and the direction of motion of a wave is called the plane of polarization.

A polarizing sheet that is used to polarize light is called a polarizer.

Polarizers are used to remove undesired components of light from a light wave by passing light of one polarization and absorbing or reflecting other polarizations. A common ordinary life example of a polarizer is found in polarizing sunglasses. The material in the lenses passes light w 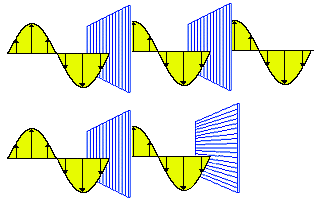 The following equation can be used to calculate the intensity of light passing through a linear polarizer:

where I(θ) is the light intensity passed by the polarizer and I0 is the incident light intensity. The angle of the E-field with respect to the transmission axis is defined as θ.

When a polaroid disc is used to test polarized light, it is called an analyzer. Analyzers are discs or sheets that are used to check whether light is polarized or non-polarized.

How to Polarize Light

Want to know more about polarization? Click here to schedule a live session with an eAge eTutor!