Molds, yeasts, mildews, mushrooms and rusts are all examples of fungi. Fungi together with bacteria are master decomposers of the biosphere. They secrete enzymes that digest food outside their body and then absorb the broken down products. Without fungi communities would become buried in their own waste, nutrients could not be recycles and life could not go on. Fungi are heterotrophs meaning they feed on other organisms, dead or alive. 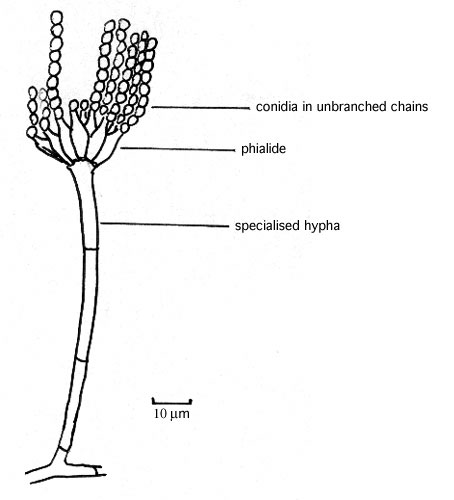 Most are saprophytes: they feed on dead and decaying matter.  Examples include molds such as Penicillium from which we get antibiotics. Parasites feed on living organism, causing them harm. Examples include: wheat rust and athletes’ foot.

A hypea outer wall is mainly made of chitin which is normally found in insect skeletons. Often hypea are in separate cells—their cytoplasm interconnects, so that nutrients flow easily throughout the mycelia .

Fungi reproduce mainly by asexual reproduction by producing spores which are dispersed by wind. Under suitable condition each spore grows into a tube and develops branching hypha. Hypea are modified and groups together to form a large reproductive structure in which spores develops. An example of fungi which we can see in our daily life is mushroom.

They are umbrella structures shaped reproductive parts of some fungi. The mycelium grows throughout the year in the soil or rotting wood. The hypha absorbs nutrients and some of them grow upwards, tightly packed and form the mushroom. Million of black spores are produced in the cap by asexual reproduction. These are released into the sir and will germinate under the suitable conditions. Several fungi are very good to eat although some need to be cooked first. If you are considering, eating wild mushrooms you must first learn to recognize and identify all you find. This is because several are either deadly poisonous or have unpleasant effects if eaten. The Death Cap Fungus contains toxins that cause liver and kidney failure and, often, death. No antidote exists for its effects. The Fly Agarics has toxins that attack the central nervous system, acting as a strong hallucinogen.

Yeast are collections of single celled fungi commonly found on the surface of fruits, flowers and leaves of plants and in the soil on animal feces and in milk.  The cell contains many food storage vacuoles which make the cytoplasm appear granular.They are generally saprophytes. They feed on dead matter, releasing enzymes onto the food to digest it and then absorbing the sugars and amino acids produced. Most respire aerobically without oxygen, producing ethanol as a waste product. While technically ethanol is a waste product we don’t consider it waste in beer and wine making or other uses of yeast such as baking and biotechnology such as making ethanol from sugar cane.

Effects and uses of Fungi:

1.    Some species of Pencillium give flavor to cheese; others make penicillin, a widely uses antibiotic.
2.    Some species of Aspergillius make citric acid which is used for manufacture of sweets and soft drinks.
3.    Bakers and brewers use yeast to produce CO2 for raising bread and for making alcohol.

1.    Molds spoil food in storage.
2.    Athlete’s foot is caused by fungi that feed on the warm, damp tissue between your toes and turn the skin scaly red and itchy.
3.    Fungi attack crops such as corn, wheat and potatoes causing damage each year.

Want to know more about fungi? Click here to schedule a live help with an eTutor!