An isothermal process is the process in thermodynamics in which temperature is kept constant. A gas confined by a piston in a cylinder can again provide an example of this, only this time the gas is not heated or cooled, and instead the piston is slowly moved so that the gas expands or is compressed. The temperature is maintained at a constant value by putting the system in contact with a constant-temperature reservoir (the thermodynamic definition of a reservoir is something large enough that it can transfer heat into or out of a system without changing temperature). In an isothermal process, the temperature stays constant, so the pressure and volume are inversely proportional to one another.

What is an Isothermal process? 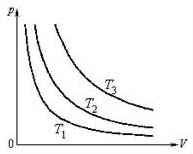 An isothermal process is a thermodynamic process in which the temperature of a system remains constant; ΔT = 0. This process occurs when a system is in contact with an outside thermal reservoir, and the system changes slowly enough to allow it to adjust to the temperature of the reservoir. The opposite extreme in which a system exchanges no heat with its surroundings is known as an adiabatic process. Isothermal processes are represented at different temperatures T through a family of hyperbolas p ~ 1 / V, which are called isotherms. The coefficient of proportionality in this equation increases with increasing temperature.

A process that, once having taken place, can be reversed and in doing so leaves no change in either the system or the surroundings. Net work and net heat transfer must be zero A reversible process is an ideal that we never achieve – all processes are irreversible. They are standards to which we can compare different processes. A Carnot cycle to which we compare all other cycles.

According to the first law of thermodynamics:

Since temperature is constant, there is no change in the system’s internal energy, i.e., DU = 0

As the work is done on the system, therefore, DW is negative, 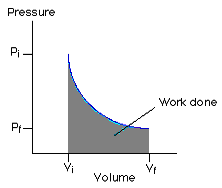 This means that, during an isothermal process, all heat accepted by the system from its surroundings must have its energy entirely converted to work which it then performs on the surroundings, so that all the energy which comes into the system then comes right back out of the system. This way, the internal energy (and thus the temperature) of the system remains constant.

Want to know more about isothermal processes? Click here to schedule a live session with an eAge eTutor!