Very high temperatures are continuously produced inside the earth by the slow decay of radioactive particles. This process is natural in all rocks. Geothermal energy was used by ancient people for heating and bathing. Even today, hot springs are used worldwide for bathing, and many people believe hot mineral waters have natural healing powers.

Geothermal Energy Is Generated Deep Inside the Earth

Geothermal energy has been around for as long as the Earth has existed. "Geo" means earth, and "thermal" means heat. So, geothermal means earth-heat.

People around the world use geothermal energy to heat their homes and to produce electricity by digging deep wells and pumping the heated underground water or steam to the surface. We can also make use of the stable temperatures near the surface of the Earth to heat and cool buildings. 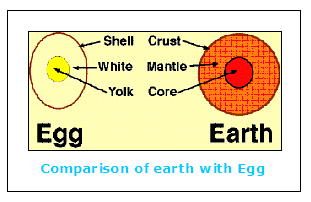 Have you ever cut a boiled egg in half? It closely resembles how the earth looks inside. The yellow yolk of the egg is similar to the core of the earth. The white part represents the mantle of the earth. And the thin shell of the egg, which would have surrounded the boiled egg if you didn't peel it off, is like the earth's crust.

Where Geothermal Energy is Found 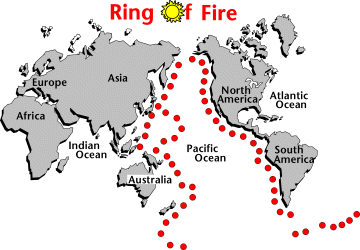 Geologists use different methods to find geothermal reservoirs. The only way to be sure there is a reservoir is to drill a well and test the temperature deep underground. The most active geothermal resources are usually found along major plate boundaries where earthquakes and volcanoes are concentrated. Most of the geothermal activity in the world occurs in an area called the Ring of Fire. This area borders the Pacific Ocean.

The most active geothermal resources are usually found along major plate boundaries where earthquakes and volcanoes are concentrated. When magma comes close to the surface, it heats ground water found trapped in porous rock or water running along fractured rock surfaces and faults. These features are called hydrothermal. They have two common ingredients: water (hydro) and heat (thermal).

Use of Geothermal Energy

• Direct use and district heating systems, which use hot water from springs or reservoirs near the surface.
• Electricity generation power plants, which require water or steam at very high temperature (300° to 700°F). Geothermal power plants are generally built where geothermal reservoirs are located within a mile or two of the surface.
• Geothermal heat pumps, which use stable ground or water temperatures near the Earth's surface to control building temperatures above ground.

Want to know more about geothermal energy? Click here to schedule a live session with an eAge eTutor!