Meiosis involves two sequential cycles of nuclear and cell division called meiosis I and meiosis II but only a single cycle of DNA replication. Meiosis I is initiated after the parental chromosomes have replicated to produce identical sister chromatids at the S phase. Meiosis involves pairing of homologous chromosomes and recombination between them. Four haploid cells are formed at the end of meiosis. Meiosis undergoes different phases in Meiosis 1 and Meiosis 2

The phases of meiosis I & II

In meiosis I chromosomes are in diploid state and re segregate producing haploid cells. It leads to genetic diversity

Replication of DNA starts with meiosis 1. The homologues pair from synapses they are bivalent (two chromosomes and four chromatids, with one chromosome coming from each parent) forming chiasmata caused by genetic recombination.

The nuclear membrane vanishes and the chromosomes attached to the spindle fibres begin to move.

Bivalent chromosome aligns in the plate as four chromatids. They have got 50% chances of getting mother's or father's homologue chromosome.

The nuclear envelope reforms and may start the process of meiosis 2. 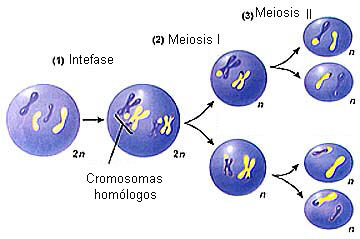 Meiosis II begins immediately after cytokinesis, and the chromosomes have fully elongated. It is just like mitosis on the contrary. The nuclear membrane vanishes by the end of prophase II the chromosomes again become compact.

At this stage the chromosomes align at the equator and the microtubules from opposite poles of the spindle get attached to the kinetochores of sister chromatids.

It begins with the simultaneous splitting of the centromere of each chromosome (which was holding the sister chromatids together, allowing them to move toward opposite poles of the cell.

Meiosis ends with telophase II, in which the two groups of chromosomes once again get enclosed by a nuclear envelope; cytokinesis follows resulting in the formation of tetrad of cells i.e., four haploid daughter cells

What is the difference between a Mitosis and Meiosis?

Want to know more about Meiosis? Click here to schedule a live help with an eTutor!