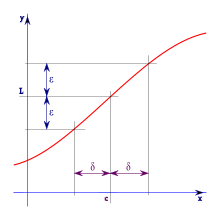 The word limit in this topic represents the limiting value of a function at a given point.  In order to learn continuity and differentiability, we must be familiar with the topic ‘limits’.  Here we learn some standard results in limits, algebra of limits, theorems related to limits etc.
Consider the function f(x) = 3x2.  We can see that as ‘x’ takes the value very close to 0, the value of f(x) also moves towards 0, so we say

We will read this as limit x tends to zero f(x) equals zero
In general, as

In some cases the function f(x) takes different values to the left of ‘a’ and right of ‘a’ so we have to find the left hand limit as well as right hand limit.
We say

‘x’ to the left of a.  This value is called the left hand limit of f at ‘a’
Similarly

‘x’ to the right of ‘a’.  This value is called the right hand limits of ‘f’ at ‘a’.
If the right and left hand limits coincide, we call that common value as the limit of f(x) at x=a and denote it by

Let ‘f’ and ‘g’ be two functions such that both

then the following are algebra of limits.
1)    Limit of sum of two functions is the sum of the limits of the functions.