Introduction to the Seebeck effect

The Seebeck effect shows that metals respond differently to heat difference, which produces a current.  The voltage created is on the order of several microvolts per degree of difference.
T.J. Seeback discovered the phenomenon of thermoelectricity in 1821 when he found that if a circuit is formed consisting of two dissimilar metallic conductors A and B, and if one of the junctions of A and B is at a temperature T1 while the other junction is at a higher temperature T2, a current will flow in the circuit and will continue to flow as long as the two junctions are at different temperatures The EMF producing this current is called the ‘Seebeck Thermal EMF’! If A is (+) compared to (B), then current flows from A to B at T1,. (Fig. 1)

The generation of an electric current (or electromotive force) occurs when conductors of different metals are joined at their ends to form a circuit, with the two junctions kept at different temperatures. The Seebeck effect is the basic operating principle of the thermocouple.

SA, SB  are  Seebeck coefficients defined as the ‘thermoelectric power’ of a material.  T2 > T1, and temperatures are constant. 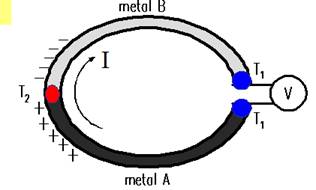 Figure 2. Creating of the heat current caused by Seebeck effect.[

Application of the Seebeck effect

The Seebeck effect is commonly used in a device called a thermocouple (so-called because it is made from a coupling or junction of materials, usually metals). In this application, it is used either to measure a temperature difference directly or to measure an absolute temperature by setting one end to a known temperature.

Consider two wires of different metals (say copper and iron) joined at their ends to form two junctions A and B as shown in the figure below. Such an arrangement is called a thermocouple. If one junction is kept hot and other  is kept cold, it will be observed that the galvanometer shows deflection. This means EMF is generated in the circuit.

The EMF thus produced is called thermo EMF, and the resulting current is known as a thermoelectric current. The above effect is known as Seebeck effect. The Seebeck effect may be defined as the phenomenon of EMF in a thermocouple when its two junctions are at different temperatures.

Other observations about the Seebeck effect.

Want to know more about Seebeck effect? Click here to schedule a live session with an eAge eTutor!