What is Total Internal Reflection?

Light is refracted as it moves from one type of transparent substance to another, such as from gl 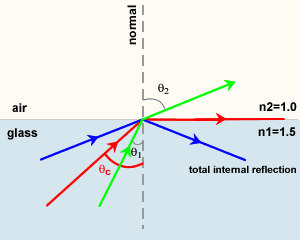 Total internal reflection (TIR) is a phenomenon involving the reflection of all incident light off of a boundary. TIR only takes place when both of the following two conditions are met:

1.    The light is in the more dense medium and is approaching the less dense medium.
2.    The angle of incidence is greater than the so-called critical angle.

In desert on a hot day, you may see a pool of water at a distance in a desert.

In nature, rainbows are formed when light from the sun is refracted and undergoes total internal reflection inside rain droplets.. The formation of a rainbow involves a series of physical phenomena -- reflection, refraction, dispersion, and total internal reflection. The occurrence of each of these is due to the interaction of light with air and water and the boundaries between them.

Before a rainbow can happen, white light from the sun has to hit raindrops at a certain angle. A ray of light will strike a drop of water in the atmosphere and undergo both reflection and refraction. The light that is not reflected crosses the air-water interface. When this happens, it slows down because water is denser than the air. The slowing of speed causes the ray of the light to bend, which is called refraction.

Different wavelengths travel at different speeds and when they encounter a medium that is denser or less dense, the speeds are affected accordingly. Hence, because white light is made up of various colors, each with its own wavelength, the colors are dispersed. This phenomenon is known as Dispersion.

The best conditions for rainbows are when the sun is fairly low in the sky, for instance at dawn or late in the afternoon. This is because total internal reflection occurs at the rear of the raindrop – i.e., at the water-to-air interface. For a rainbow to be visible, the angle of incidence at that interface has to be greater than the critical angle. See the diagrams below.

If a raindrop high in the sky is observed, then a red ray will be seen. Conversely, a drop lower in the sky will direct violet light to the observer. The other colors of the spectra lie in between red and violet

Want to know more about total internal reflection? Click here to schedule a live session with an eAge eTutor!