What is a Tense?

Tense is used to show the relation between the action or the state described by the verb and the time which is reflected in the form of the verb. There are three basic tenses in the English language.  These are Present, Past and Future

This is a verb form that indicates or can indicate a relation between the time the action in the verb occurs and the time the verb is uttered.  A verb tense can also give an indication of the duration of the verb’s action and when or if it is completed.

We use simple present tense when the action is general and the action happens all the time in the past, present and future. Action is not always happening now and the statement is always true.

This is a grammatical combination of present tense and the perfect aspect, used to express a past event that has present consequences. It is a compound tense in English. The events described by present perfects are not necessarily completed.

Example:
•    He has improved in Math since last year.
•    Lata hasn’t finished reading the book as yet.

This indicates continuing action, something that is going on now. It indicates actions happening at the time of speaking or right now. It can be used to talk about actions occurring over a period of time which includes the present. However it may not necessarily be this very moment. It is sometimes used to indicate ongoing, developing, imminent or future actions. Present progressive tense may be used to talk about actions happening in the near future especially for planned future events.

This is similar to the present perfect tense except that the action is continuous. It describes something that starts in the past and continues into the present.

This is used to talk about events that happened at a specific time in the past. A time adverb is used in order to indicate when it happened. It can also be used to describe events that happened over a period of time in the past but not now. It may be used to talk about repeated actions that took place in the past. Simple past talks about a completed action in a time before now. Duration is not important. It can be the distant or the recent past

Example:
•    He was working hard in the garage all day.
•    When he was having his lunch, the postman knocked at the door.
•    We were walking through the woods this afternoon.

This indicates a continuous action which was completed at some point of time in the past. It is formed with the modal had and been plus the present participle of the verb with an-ing ending.

This is used to talk about things that will happen at a later time than now.
Using ‘be going’ is one way to form the future simple tense. Another way is to use will. When we use will/shall for prediction they combine with verbs to form tenses in the ordinary way.

This is used to describe an event that is expected or planned to happen before another event in the future. We use future perfect tense when we want to emphasize ‘no later than’. It puts a ‘no later than’ limit  on when the action will be completed. It is a verb form which expresses action completed by a specified time in the future.

This expresses action at a particular moment in the future. The action will start before that moment but will not have finished at that moment. It emphasizes an action or event that will be in progress at some time in the future. Here present continuous tense is recycled.

Example:
•    I will be practising guitar at 5pm tomorrow.

Example:
•    The baby will be sleeping when they come.
•    They will not be walking by the river this evening.

This indicates a continuous action that will be completed at some point in future. This is formed by the modal “will” plus “have” plus “been” plus the present participle of the verb(with an –ing ending) 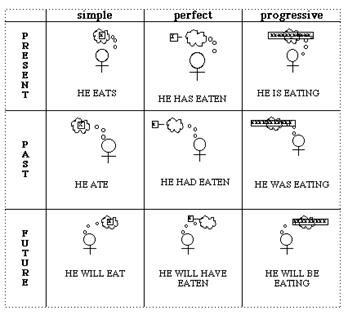 Want to know more about Tenses? Click here to schedule a live help with an eTutor!