What is a Gerund?

A gerund is a noun made from a verb by adding-ing. When a verb ends in a ing, it may be a gerund or a present participle. But it should be noted that they are not the same. When we use a verb like a noun, it is usually a gerund and when it is used as an adjective or verb it is a present participle. Gerunds are sometimes called verbal nouns. They are forms of verbs that act as nouns. It is not easy to identify a gerund.

Functions of a Gerund 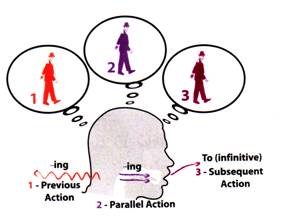 A gerund has several functions.
1.    They are used as objects following preposition and prepositional expressions.

2.    They are used as subjects and complements.

3.    They can be used as subjects following certain verbs.

•    The girls got tired of watching tennis.
•    The children enjoyed playing soccer.

4.    Gerunds can sometimes take objects of their own.

•    Preeti is thinking of joining college.
•    Ram is afraid of taking decisions.

Certain verbs are followed by gerunds.

•    Eating mangoes in summer is fun.
•    Treating patients is his passion.
•    Painting landscapes is her favorite pastime.
•    Running to class is his habit.
•    Tripping a player is a foul.

Infinitives are ‘to’ form of the verb. The infinitive of learn is ‘to learn’.An infinitive can be used as a subject, object or complement of a sentence.


Infinitives can be made by adding not.
•    She decided not to sing.

As objects of a sentence it is difficult to decide between a gerund and an infinitive. They are not normally interchangeable. The main verb in the sentence determines whether a gerund or infinitive should be used. Some verbs are followed by gerunds as objects while some are followed by infinitives

Only gerunds can be the object of prepositions.

•    We are thinking of speaking in Tamil.

When a verb follows a verb, it takes either a gerund or an infinitive.

Some verbs can take the gerund or infinitive without the loss of meaning.

What is the difference between gerunds and infinitives?

Want to know more about Gerunds? Click here to schedule a live help with an eTutor!