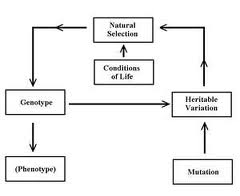 A union of ideas from several biological specialties which provides a widely accepted account of evolution is known as modern synthesis of evolution.

Other names of modern synthesis

This synthesis includes evidence from biologists, trained in genetics, who studied populations in the field and in the laboratory. 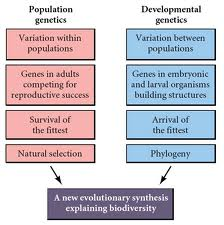 During that period population genetics were very important scientist researched on these topics. This led to the Neo-Darwinian theory of evolution which played a vital role in Mutation and variation within a population. Natural selection then altered frequency of genes in a population it replaced Darwinian Theory and the contemporary ideas on evolution is termed as current ideas on evolution are usually referred to as the Modern Synthesis.
He said that Darwin was not aware of genes and genetic drift. The modern theory of the mechanism of evolution differs from Darwinism in three important respects.

It understands the mechanisms of evolution through natural selection and one of the main causes is genetic drift. IT has inherited characters named genes. Variation within the particular population is due to presence of alleles. Speciation is due to the small genetic changes is equivalent to Macro and Micro evolution.

Modern synthesis understands the genes, "Phenotype" and population and Darwinism explains about only the speciation. This led to the confusion between evolutionists. There are many controversies leading to this and the evidence is the Fossil record .This explains how evolutionary models and it mechanism very clearly. Some of the evolutionist believes in Modern synthesis while some believe in Neo Darwinism.

What is the difference between Evolution and modern synthesis of evolution

Want to know more about evolution and Darwin? Click here to schedule a live help with an eTutor!