What is Genetic code?

Genetic code consists of nucleotide bases which has a sequence of amino acids in proteins. The genetic code (or) codons have triplet base sequences in m RNA, which act as code words for amino acid. The DNA sequences that code for a specific protein (or) polypeptide is called a gene. There are 4 different bases in m RNA - A, G, C and U. They produce 64 different triplets. Out of 64 codons  61 codons code for  20 amino acids .

The genetic code is the set of rules by which information encoded in genetic material (DNA or mRNA sequences) is translated into proteins by living cells.

Note: Not all genetic information is stored using the genetic code

Translation starts with a chain initiation codon (start codon). The codon alone is not sufficient to begin the process and initiation factors are also required to start translation. AUG and GUG are called initiating codons.

Stop codons are also called "termination" or "nonsense" codons. The 3 stop codons are UAA, UAG and UGA which don’t have amino acids.

1. The genetic code is universal as the same sequence of  amino acid  are in all living organisms
2. It is degenerateive in nature as the same code appears for most amino acids
3. It is commaless.
4. The third base  pair of the codon is not very  specific.
5.The  code is not over lapping 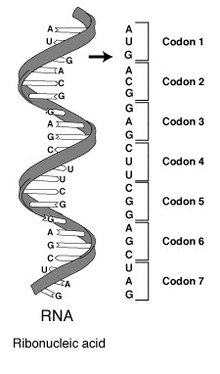 •    mRNA is translated in the 5' to 3' direction, the codon sequences must occur in a similar orientation so that they will be properly translated.
•    The first base of a codon must be located at the 5'-most end of the codon.
•    Codons must always be read from 5' to 3'.
•    One nucleotide can only be a part of one codon.
•    It cannot be a part of two different codons. Therefore, successive codons are composed of adjacent, not over-lapping, trinucleotides.
•    While reading the code from a specific nucleotide, you continue reading it by threes until the end.
•    The beginning of an amino acid sequence is specified by a start codon located somewhere in the mRNA sequence, this is usually an AUG, but can also be a GUG.
•    The end of a sequence is specified by one of three stop codons: UAA, UAG, or UGA.

What is the difference between translation and transcription?

Want to know more about codon? Click here to schedule a live help with an eTutor!