The cosmological theory of the early development of the universe is called the Big Bang Theory.  This theory states that the universe expanded rapidly and it was initially compacted, dense and very hot. Because of this expansion the universe becomes colder than before continues its expansion and cooling. This expansion happened because of the cosmic explosion, which was occurred about 10 to 20 billion years.

This theory is supported by scientific evidence and observations.

Currently it is defined as the ‘beginning of the universe’.

Albert Einstein in 1914 proved the expansion of the univers

e with the ‘field equations’ i.e., mathematical equations.  Alexander Friedmann provided the solutions to the field equations. Supporting evidence given by Edwin Hubble. He discovered ‘the light of distant galaxies was universally shifted toward the red end of the spectrum’.
Based on this proof he came to a conclusion that ‘the galaxies were moving away from each other’. He observed that the galaxies farther away were moving away faster and it proved that the universe is expanding uniformly.

The term "Big Bang" was coined in 1949 by Fred Hoyle during a BBC radio program, The Nature of Things; the text was published in 1950. Today’s universal conditions are totally opposite to the past conditions.

•    Einstein developed General Theory of Relativity which he proposed as a new theory of gravity.
•    He observed that the gravity is supposed to be a distortion of space and time itself.
•    The matter in the universe is homogeneous and isotropic when averaged over very large scales. This is called the Cosmological Principle.

This Big Bang Theory actually explained the immediate happenings after the creation of the universe.
The idea of inflation was universally accepted by all scientists. The universe expanded very fast at first and then slowed its expansion. 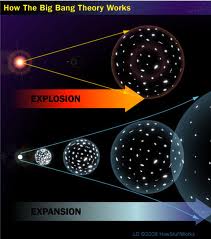 This is absolutely depends on the density, or concentration of mass.

If the universe is open, it will keep expanding forever, even though the rate of expansion will gradually slow.

People imagine that
•    The expansion ends up with a ‘explosion’
•    Little fireball appearing somewhere in space.

Research on the theory

New observations are being made by scientists and they not found any major problems with the big bang theory, but the theory is being constantly adjusted to match the observed universe.