There are many words in any language but they have different functions. For example some words express things or actions and words, combine to form another words. So these words are building blocks of any language. Just like parts of the house. If we want to build a house we need to   have bricks, cement with concrete base. We use windows and door to make door ways to combine all of these we use cement and each part has its own function. In the same way when we want to construct a sentence we use different words and each one has its own function.

What is a Conjunction?

A conjunction is a part of speech that connects two words, sentences, phrases or clauses together. It is an invariable grammatical particle and may or may not stand between the items it conjoins.

This is the simplest form of conjunction .It indicates or denotes equality of relation between the ideas it joins. Sometimes an 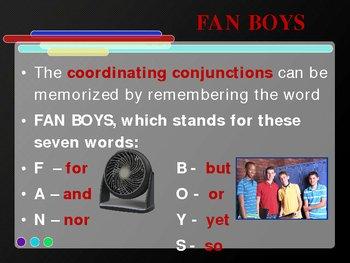 It is always correct to put a comma before a conjunction when it joins independent clauses.

Example:
•    She likes bread with butter, and I like cheese.
•    I want to become a singer, so I am attending music lessons.


For short and independent clauses, a comma is not necessary.

Example:
•    They are helpful so they help people.
•    My dog chases cats yet he plays with the tabby cat next door. 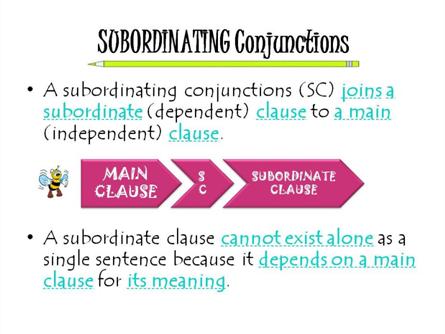 Example:
After, as, before, than, when, whenever, since although, that, which, while, lest, no matter, till, supposing.

A subordinate conjunction has two jobs. It provides the transition between the two ideas in the sentence. This transition will indicate time, place or cause and effect relationship. It also indicates which of the ideas is more important by reducing the importance of one clause.


Example:
•    Rehan will get a chance to bat once Sohail leaves the crease.
•    Since she was late Sheena stood outside and waited for her teacher.

There are many kinds of Subordinate conjunctions.

1.    Subordinate Conjunction of place
Example:
•    She will drive wherever you wish.

2.    Subordinate Conjunction of purpose.
Example:
•    He must work hard in order to pass the test.

3.    Subordinate conjunction of reason
Example:
•    I am packing my bags tonight because the flight is at 7.00am tomorrow.

4.    Subordinate conjunction of condition
Example:
•    I will not help her unless she requests me.

5.    Subordinate conjunction of concession or contrast.
Example:
•    Although I reached on time, the counter was closed.

This is a relationship between two statements where one must be false and the other true. It is a paired conjunction that links balanced words, phrases and clauses. The elements connected by a correlative conjunction are similar in length and grammatical form.

They always appear in pairs.

Example:
•    She will either arrive tonight or tomorrow evening.
•    He not only cleaned the house but also cooked and served.
•    The bomb blast destroyed not only the house but also the neighboring market.
•    Neither Rita nor Nita likes playing tennis.


Want to know more about Conjunctions? Click here to schedule a live help with an eTutor!