Natural selection is usually the most powerful mechanism or process causing evolution to occur. It is not creating any new genetic varieties but selects among the existing variation already in a population.  It produces genetic combinations in the generations which are not found in earlier parental generations. Genetic recombination is a critical process in evolution.


Recombination may also help explain how sexual reproduction has furthered evolution by diversifying species.  “A synergism between recombination and natural selection may have played a major role in Darwinian molecular evolution,” Levinson says, “a role that is obscured by the semantics of the modern synthesis theory.”

Recombination generates under-represented genotypes by breaking down linkage disequilibrium between genes. Recent analyzes have specified the conditions under which recombination is favored (Rate of mutation).

Recombination occurs by the chromosomal crossing-over. DNA is exchanged between a pair of chromosomes in crossing over. Thus two genes that were previously unlinked can become linked because of recombination. Truly, the genetic changes induced during meiosis are highly controlled and pin-point specific reactions which occur by design to produce populations with variability.

Both sperm and ova normally get only half of the pair (haploid) of parent chromosomes (23 pairs-diploid).  Chance plays an important role on which half goes to which sex cell.

During fertilization, a single sperm and an ovum combine their chromosomes to produce a diploid zygote with the normal full set of 46 (in humans), but with a new combination of chromosomes distinct from either parent.

New combinations of existing genes are produced usually on their homologous chromosome.  This is the process known as crossing-over which results with the recombination of parental genes. As a result of genetic recombination, the genomic constitution of each offspring is unique in the entire world. 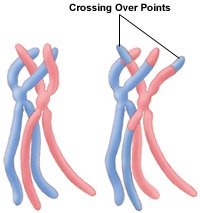 One end of each chromosome of homologous pair is exchanged along with the genes that they contain.  The next generation inherits chromosomes with partially new sequences of alleles.

Recombination by itself does not cause evolution to occur.  By creating combinations of genes that nature selects for or against, it contributes the mechanism works with natural selection
Recombination is an important source of new variation for natural selection to work upon and it places a genetic load upon the population.
As David Haig explains, the reason for recombination has been a puzzle for evolutionary biologists.