Dinosaursare the largest land animals ever to have existed on our planet.They are a diverse group of animals that were the dominant terrestrial vertebrates.They are represented on every continent by both extant species and fossil remains

The age of giant reptiles

Having ruled the Earth for 160 million years – far longer than humans who appeared a mere 2 million years ago, dinosaurs mysteriously died out, making way for mammals and birds who conquered the land, the sea and the air. This mass extinction is known as the Cretaceous–Tertiary Extinction Event.


The life of Dinosaurs

Dinosaurs ruled on land, unlike the marine or flying reptiles that lived on Earth at the same time. All dinosaurs did not eat the same foods. Some were carnivores that ate meat while others were herbivores and at only plant matter.  Some may have been omnivores, eating both plants and animals.  The sauropods were the largest dinosaurs.

Interpretations of dinosaur behavior are generally based on the pose of body fossils and their habitat, computer simulations of their biomechanics, and comparisons with modern animals in similar ecological niches. Overall it is believed that they are closest in behaviour to crocodiles.

•    Rises up on its hind legs before falling heavily on the neck of a baby brachiosaurus, which it seizes in its jaws.
•    The air resounds with the sound of the two animals lashing each other with their whip like tails.
•    Most terrifying carnivore!

•    Around 15 meters long, this was the largest warm-water marine reptile

•    Traveled through the water, using its four long flippers as paddles.

•    Long neck allowed it to fish by grasping fish with its teeth.

•    A herbivore
•    Used its clawed fingers to defend it against carnivorous enemies.

•    A swamp herbivore, it was relatively agile and used its tail like a whip to scare off its enemies.

•    Used its long horns to defend it from predators. 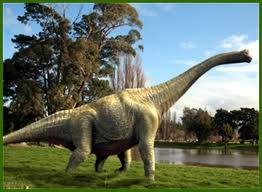 •    Tallest dinosaurs
•    Higher than a three-story building.
•    Its long neck earned it the nickname of “giraffe dinosaur”.