Nuclear energy is the energy that is trapped inside atoms. The ancient Greeks believed that the smallest part of nature is an atom. But two thousand years ago, they did not know that atoms are made up of further smaller particles — a nucleus of protons and neutrons that surrounded by electrons, which swirl around the nucleus much like the earth revolves around the sun. An atom's nucleus can be split apart. This is known as fission. When fission occurs, it initiates a chain reaction that releases a tremendous amount of energy in the form of both heat and light. This energy, when slowly released, can be harnessed to generate electricity. When it is released all at once, it results in a tremendous explosion such as with an atomic bomb. 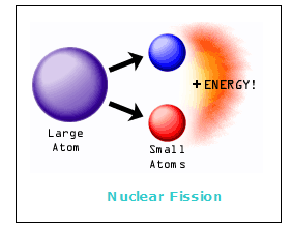 How is Nuclear Energy Produced?

Nuclear energy is produced naturally and through man-made operations. Nuclei can produce energy via two different types of reactions, namely, fission and fusion reactions. Fission is a break up of a nucleus into two or more pieces (smaller nuclei). Fusion is the opposite process – the formation of a bigger nucleus from two smaller nuclei.

In fission processes, which were discovered and used first, a heavy nucleus, such as, for example, uranium or plutonium, splits into two fragments that are both positively charged. These fragments repel each other through electric force and move apart at a high speed, which distributes their kinetic energy in the surrounding material. 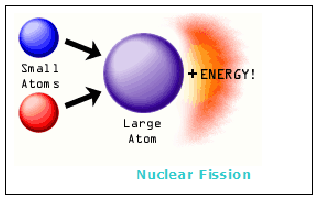 In fusion reactions, everything goes in the opposite direction. When very light nuclei, such hydrogen or helium isotopes, are placed very closely together (no more than a few fm (1 fm = 1013 cm) from each other), they experience a strong attraction that overpowers their Coulomb (i.e., electric) repulsion. As a result, the two nuclei fuse into a single nucleus, and collapse at extremely high speeds toward each other. They must get rid of excessive energy to form a stable nucleus, which is emitted by ejecting a neutron or a photon.

Nuclear energy is a clean, reliable, and economically competitive energy source. It is the only source of energy that can replace a significant proportion of the fossil fuels (coal, oil and gas) that people use and which massively pollute the atmosphere and contribute to the greenhouse effect.

Nuclear energy produces almost no carbon dioxide, and no sulfur dioxide or nitrogen oxide whatsoever. These gases are produced in vast quantities when fossil fuels are burned.

The burning of fossil fuels result in emissions of carbon dioxide, which is poisonous to the environment as well as to human life. There is no release of carbon dioxide at the time of nuclear reaction.

Nuclear reactors make use of uranium as fuel. Fission reaction of a small amount of uranium generates a large amount of energy.

Nuclear waste must be deposited in deep geological storage sites so that it does not enter the biosphere. When it is deposited correctly, its impact on an ecosystem is minimal. Whereas stable chemical waste, such as arsenic or mercury, lasts forever, nuclear waste decays over time.

Want to know more about nuclear energy? Click here to schedule a live session with an eAge eTutor!