Solution of a system of linear equations in two variables

Then the system of equations can be written as AX=B 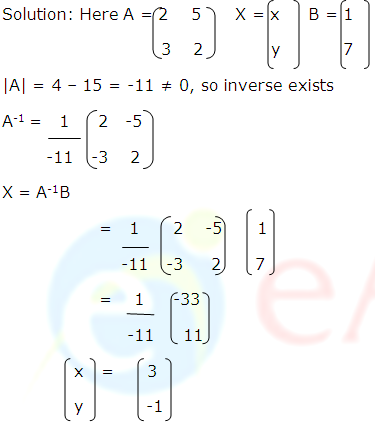 Solution of a system of linear equations in three variables

Consider the system of equations a1x+b1y+c1z=d1
a2x+b2y+c2z=d2
a3x+b3y+c3z=d3
As in the previous case, take the coefficients of x, y and z as A unknown values as X and constants after equality sign as B.

Here also, we can write the system of equations as AX=B
If A is non-singular matrix then inverse exists and X=A-1B
Example: The sum of three numbers is 6.  If we multiply third number by 3 and add second number to it, we get 11.  By adding first and third numbers, we get double of the second number.  Represent it algebraically and find the numbers using matrix method.
Solution: Let first, second and third numbers be x, y and z respectively.
According to the given conditions, we have
x + y + z = 6
y + 3z = 11
x + z = 2y

This system can be written as AX = B, where 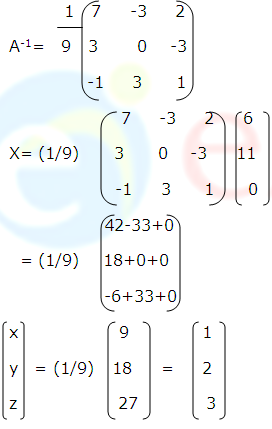 A system of equations is said to be inconsistent if its solution does not exist.

Conditions for the consistency of a given system of equations  : 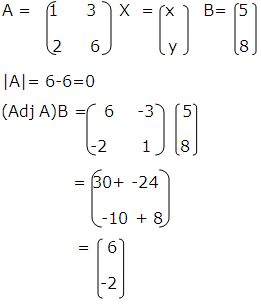 ≠ 0
Since (Adj A) B ≠ 0, the system is inconsistent and has no solution.