What is an Image?

Images are “pictures” of objects that are formed in spaces where light rays meet. The law of reflection -– that the angle of 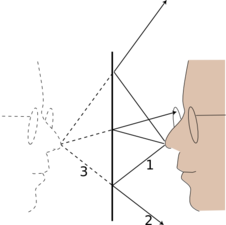 incidence is equal to the angle of reflection -- governs the construction of images from any object that is placed in front of a mirror. When the mirror is a single flat surface, this construction is relatively simple.

In the figure above, 1 marks where an image generated by the diffuse reflection of light at a person's nose originates. Light waves bounce off the mirror and produce new rays, 2. To anyone whose eye is in the right position to sense one of these rays, it will appear to have come from a single point behind the mirror, 3. This point will be where the tip of the image-person's nose appears to be. The pattern of rays coming from the mirror is exactly the same as it would be if there were an actual face behind the mirror.

Ray tracing gives the position of an image by drawing one ray perpendicular to the lens, which must pass through the focal point, and a second ray that passes through the center of the lens and is not bent by the lens. The intersection of the two rays gives the position of the image. Note that the real image is inverted. The image also happens to be larger than the object, which happens because the object is between f and 2f away from the lens. If the lens were farther away than 2f, the image would seem to be closer to the lens than 2f, and would be smaller than the object.)


In this case the virtual image is upright and shrunken

Virtual images are formed by diverging lenses or by placing an object inside the focal length of a converging lens.

The ray-tracing exercise is repeated in the case of a virtual image.

In this case image is virtual and reduced in size

Virtual images can also be produced when an object is placed inside the focal length of converging lenses. In that case, the virtual image is upright and enlarged, since it is further from the lens than the object.

Want to know more about real and virtual images? Click here to schedule a live session with an eAge eTutor!