What are Spherical Mirrors?

Spherical mirrors are mirrors whose surfaces form a part of a hollow sphere.

The spheres can be made of glass or any polished metal surface. 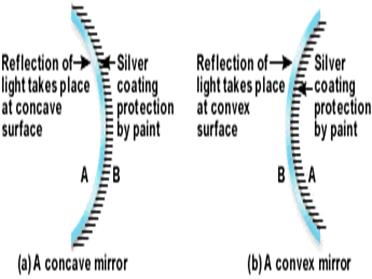 If the mirror coating is on the inside of the spherical surface, then the spherical mirror is called a convex mirror. The most commonly occurring examples of convex mirrors are the passenger-side mirrors of cars. These type of mirrors have wider fields of view than equivalent flat mirrors, and the objects that appear in them generally look smaller (and, therefore, farther away) than they actually are.

If the mirror coating is on the outside of the spherical surface, then the spherical mirror is called a concave mirror. The most commonly occurring examples of concave mirrors are shaving mirrors and makeup mirrors. As is well-known, these types of mirrors magnify objects that are placed close to them.

Some characteristics of convex and concave mirrors 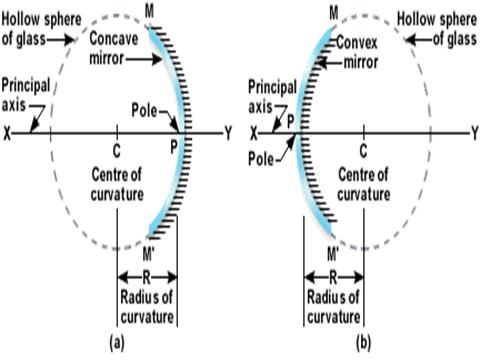 4. Principal axis of a mirror :

•    The aperture of a mirror is the portion of the hollow spherical surface from which reflections from the mirror take place.
•    In the figure, the distance MM’ is the aperture of the mirror.

•     When parallel rays of light coming from an infinite distance fall on either a concave or a convex mirror, they are reflected back to a point on the principal axis XY.

•    The focus is where an image is formed of an object that is placed at a far distance.

Want to know more about spherical mirrors? Click here to schedule a live session with an eAge eTutor!