As many centuries passed few people questioned the origin of evolution of the species of their day.  Most thought the world is a creation of God and such attitudes were accepted worldwide. This was supported by the observations made by scientist across the globe.  All the creatures were well adapted to the environment and the various ways of living they also believed that these were created by God and each one has its own role in the world.

As the years passed people started getting evidences of the creation and they began to explore the natural world. Fossils were discovered showing animals that were no longer seen alive. These discoveries

led scientists to develop new theories as to the creation of species. Scientist like George Louis and Jean-Baptiste Lamarck  studied and analyzed the use of inheritance and traits acquired by the different species and how changes can occur. These theories helped to understand the evolutionary process. Charles Darwin was the father of evolution. He helped people understand what exactly evolution is. 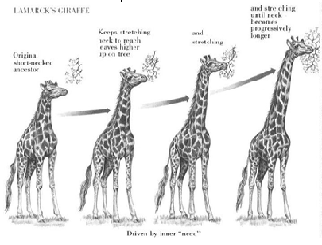 Lamarck, in the new era of evolution, understood the inheritance of acquired characters which he called soft inheritance or Lamarckism. Though he did not get much recognition he paved the way for evolution. He gave a classic example of giraffe’s neck for the “use and disuse” theory. According to Lamarck's theory, giraffes could, because  a lifetime due to straining for high leaved,  develop elongated necks to reach these high branches. He could  explain properly with this theory to the natural tendency toward perfection. He also told about the toes of water birds to swim better gained elongated, webbed toes.  These examples shows how change in traits occur as the generations pass.

His work on inheritance of traits evolved, too!  He found that traits changed or acquired over a person’s lifetime and could be passed down to its offspring. Giraffes who had  long necks would have passed it to their offspring with long necks rather than the short necks.  This type of inheritance is called Lamarckian inheritance but was disapproved by hereditary genetics. He concluded that species started out simple and consistently moved toward complexity, later it came close to perfection.

Want to know more about evolution and Lamarckism? Click here to schedule a live help with an eTutor!