The majority of Earth's atmosphere (approximately 78%) is nitrogen. The nitrogen cycle is the process by which nitrogen is converted between its various chemical forms. Nitrogen in the air becomes a part of biological matter mostly through the actions of bacteria and algae in a process known as nitrogen fixation.

78% of the atmosphere nitrogen gas can’t be directly used by living organisms. The nitrogen gas is reduced to ammonia by nitrogen fixing bacteria. These bacteria lives in all places like, soil, water as a free living bacteria or in the root nodules of legume plants (pea, clover plants)

This is the best example of the mutualism interactions. Because, plants gain useful nitrogen from the bacteria and the bacteria gain carbohydrates and protection from the plants. 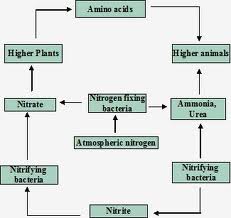 The Major stages of
Nitrogen cycle

Mineralization
After nitrogen is incorporated into organic matter, it is often converted back into inorganic nitrogen.

Ammonification:
Detritus material consists of proteins. These proteins break down to form ammonia by saprophytes. It has two stages.

When plants or animals die or release waste the nitrogen is returned to the soil in the output of the decomposers, is ammonia. Ammonia is toxic, but the nitrite bacteria in the soil and in the water which take up ammonia and convert it to nitrite, which is nitrogen with two oxygen.

Nitrification:
Oxidation of ammonia into nitrate is done by the Nitrifying bacteria. This happens in two stages:

Denitrification:
Conversion of nitrate into N2 and NO by the anaerobic denitrifying bacteria is called as denitrification. After this process the N2 lost to the air. We can note the constant loss of "useful" nitrogen from soil. That’s why the nitrogen fixation is considered as an important biological process.  Nitrite is bit toxic, but nitrate bacteria take nitrite and convert it to nitrate, which can be taken up by plants to continue the cycle.

Want to know more about the uses of Stages of nitrogen cycle? Click here to schedule live online session with e Tutor!