Introduction to Lines and Angles

A line is a straight one-dimensional figure having no thickness and extending infinitely in both directions.

A line is sometimes called a straight line.

A line segment is a part of a line that is bounded by two distinct end points and contains every point on the line between its end points.

Ray is part of a line which is finite in one direction, but infinite in the other. 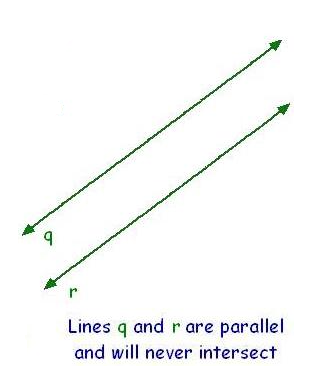 Lines that have one and only one point in common are known as intersecting lines. The point where two lines intersect or cross each other is called the point of intersection. The number and locations of possible intersections between two can be only at one point. But the angles formed between them can be infinite. That is, two lines can pass through one point, intersecting each other in infinite ways.

We measure the size of an angle using degrees.
Example:

An acute angle is an angle measuring between 0 and 90 degrees.

An obtuse angle is an angle measuring between 90 and 180 degrees.

An angle bisector is a ray that divides an angle into two equal angles.