Mendel discovered many laws with his experiments on the Garden pea plant.

He discovered different results after the crossing. When he crossed the white flower and purple flower plants, rather than being a mix of the two, the offspring was purple flowered. 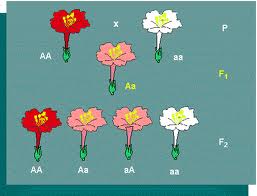 He then came to the conclusion that the inheritance is done by some "factors",  and one of which is a recessive characteristic and the other dominant.

Mendel factors later called as genes.  The genes occur in pairs in normal body cells and segregate during the formation of sex cells. Each of the parent becomes part of the separate sex cell.

He proved that the purple flower genes were dominant in plants, hide the recessive white flower gene. After the self-fertilization the first filial generation F1 obtained the 3:1 ratio. Based on this he theorized that ‘genes can be paired in three different ways for each trait: AA, aa, and Aa.’

Alleles are the alternative forms of a factor. The genotype is made of many alleles. Phenotype can be influenced by alleles as well as by its environment.

One allele is received from the female parent and the other from male parent. And these are inherited to next generation once the gametes have been produced. Gametes are the egg of female parent or male parentIn the gametes, the paired alleles separate randomly so that each gamete receives a copy of one of the two alleles. In heterozygous individuals  dominanat allele only expressed and the recessive allele would be present as a hidden factor. 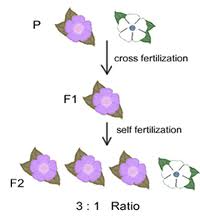 Law of Segregation (The "First Law")
When any individual produces gametes, the copies of a gene separate so that each gamete receives only one copy. A gamete will receive one allele or the other.

Law of Independent Assortment (The "Second Law")
Alleles of different genes assort independently of one another during gamete formation. By mixing one trait always resulted in a 3:1 ratio between dominant and recessive phenotypes. But by mixing two traits results with  9:3:3:1 ratios and proved that the two genes are independently inherited with a 3:1 phenotypic ratio.

Want to know more about the “Laws of Mendel?” Click here to schedule live homework help from a certified tutor!


About eAge Tutoring
eAgeTutor.com is the premium online tutoring provider.  Using materials developed by highly qualified educators and leading content developers, a team of top-notch software experts, and a group of passionate educators, eAgeTutor works to ensure the success and satisfaction of all of its students.