The atmosphere of the Earth consists of gases known as greenhouse gases. It plays in important role in allowing life to exist on earth. It is recording an alarming rise and is signs of an ominous future.

Our planet absorbs energy from the sun to sustain life. It also releases part of this energy into the atmosphere in the form of infra red rays. These rays, invisible to the naked eye, are felt in the form of heat. Greenhouse gases present in the atmosphere in small quantities are not allowing this heat to escape into space. Hence it flows back into the Earth’s atmosphere, and helps maintain a temperature suitable for life to exist on Earth.

After the industrial revolution, the concentration of greenhouse gases rose considerably, causing the Earth to become warmer. This rise in temperature has led to climate change. This climate change of a place can happen over long periods of time when natural changes in the atmosphere lead to an increase in the greenhouse gases. Therefore over a period of time, the earth naturally gets warmer.

Human activity, such as burning of fuel, coal and gas has interfered with the natural carbon cycle and it is these carbon emissions that are the predominant reason for global warming. 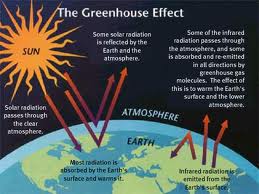 Nitrous oxide: Released into the atmosphere through burning fuels.

Carbon dioxide: CO2 was the first greenhouse gas what was recorded to have increased (burning of fuel). Prior to the industrial revolution, CO2 emissions were fairly stable, but industrial activity has seen CO2 increase by nearly 31%.

How Carbon is added to the atmosphere?

•    Man's dependence on gas and power is constantly on the rise.
•    The vehicular traffic
•    Increase in the number of vehicles invariably leads to high carbon emissions. 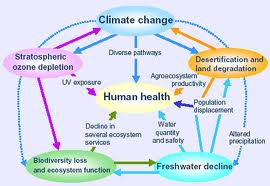 Scientists have identified 2°C as the maximum rise emissions that the earth will be able to sustain. If continue to rise, each degree rise will spell disaster, not only for the ecology but for man as well and may even lead to mass extinction.