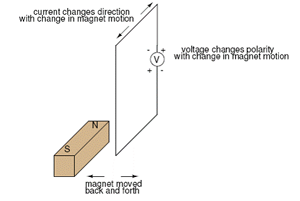 An easy way to create a magnetic field of changing intensity is to move a permanent magnet next to a wire or coil of wire.

Remember: the magnetic field must increase or decrease in intensity perpendicular to the wire (so that the lines of flux "cut across" the conductor). Otherwise, no voltage will be induced.

Electromagnetic induction is produced by moving a magnetic field across a conductor. An emf is induced in a conductor when the magnetic flux linked with it changes. This process is used in the operation of generators, all electric motors, transformers, induction motors, synchronous motors, solenoids, and most other electrical machines.

(a) coil and magnet (as described above)
(b) coil and coil -- one of coils is connected to an ac supply, which generates a changing magnetic field in this coil, which then induces a current in the second coil.

e = df/dt
Faraday named the current produced the ‘induced current’, the elf the ‘induced elf’, and the phenomenon ‘magnetic induction’.

Induced emf = change in flux / time
e = (final flux – initial flux) / time
e = - dΦ / dt
The minus sign indicates the direction of the induced emf, and can be ignored in calculations of e. 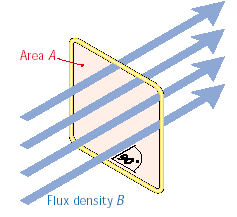 Magnetic flux can be thought of as the total number of magnetic field lines passing through a particular area.
Φ = BA
B = magnetic flux density, A = area

flux density over an area of 1m2 is 1T

Want to know more about electromagnetic induction? Click here to schedule a live session with an eAge eTutor!