What Is an Atom?

The concept of the atom is given by John Dalton. He proposed a theory of atom known as Dalton’s atomic theory.

According to him atoms are the smallest and indivisible part of matter.  They are considered as building block of matter. Everything around us in the universe is made up of atom. Any substance composed of only single type of atom constitutes an element. There are total 109 elements in the periodic table, of which 92 elements are found naturally whereas another 17 elements are artificially prepared by the scientists. 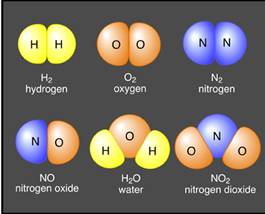 When a chemical reaction takes place between two elements, it takes place at atomic level to form a compound. As in the image the NO, H2O and NO2 compound is formed from different atoms.

According to Dalton theory, atoms are considered as indivisible part of matter. Later on, some postulates of this theory are contradicted by modern atomic theory. According to this theory:

Structure of an Atom

In 20th century, Rutherford studied the atomic structure and discovered the presence of atomic nucleus in the centre of atom. He suggested that nucleus contains all the positive charge that is protons in the centre and to oppose positive charge, sufficient numbers of electrons are revolving round the nucleus. The attractive force of protons present in the nucleus is balanced by centrifugal force arising due to rotation of electrons around it. But Rutherford’s atomic model couldn’t explain the stability of atom.

Neil Bohr, a Danish scientist proposed Bohr’s atomic model to explain the structure of atom. According to him, electrons revolve around the nucleus in fixed orbits and they are associated with certain amount of energy levels. The levels are designated by integer n or by K, L, M, N ...shell.  When an electron absorbs energy it moves to higher energy level or shell while same electron moves to the lower energy level when it loses same amount of energy. This atomic model gives specific location and type of rotation of electrons around the nucleus.

Constituents of an Atom

All the above theories prove that an atom consists of central

The central nucleus consists of protons and neutrons and electrons are revolving around the nucleus along imaginary path known as shells or orbits or orbital’s as shown in the figure.

The nucleus consists of heavy subatomic particles called protons and neutrons. Protons and neutrons together called as nucleons. Protons are positively charged particles while neutrons are neutral having no charge on it. Therefore nucleus of an element is positively charged. Protons and neutrons are approximately of same size and same mass. As we know, like charges repel each other and unlike charges attract each other. Force of repulsion acts between the protons present in the nucleus as they are of same positive charge. But strong atomic binding energy combat and overcomes this force of repulsion and helps to hold the nucleons together in a nucleus.

Electrons are negatively charged particles revolving around the nucleus in a particular orbit or shell. The negative charge of electron is balanced by the positive charge of proton present in the nucleus. Magnitude of proton and electron in an atom are equal but of opposite sign which makes the atom stable. As they are oppositely charged they are attracted toward each other.

The mass of a proton is 1840 times larger than the mass of an electron. Therefore, the mass of atom is concentrated in its nucleus and electron occupies the volume of an atom.

Give some more examples of isotopes.