Types of clauses you must know - eAge Tutor

Types of clauses you must know

When you are learning English, you will come across many such words that have more than one meaning. To master those words, you need to understand how the words make sense when used together and not separately.

In grammar, a clause is the smallest grammatical unit that can express a complete proposition. Learning about clauses is very important in grammar.

A clause is something that helps us express, in the form of spoken words or written text. It is a group of related words which includes a subject and a verb. Unlike a phrase, a clause can express what the sentence is all about with the existence of a subject and when we include a verb, we can tell what the subject is doing.

There are four types of clauses:

This clause is all by its own. It is also called as a main clause. It doesn’t need any other word or sentence to pile up with it. This clause itself can make a complete sentence. It has a subject and a predicate (verb) to tell you what exists and what is going on. These sentences can be very simple and yet fulfill the complete thought through it. For instance,

“Christi’s daughter went to play badminton”. Here the subject is ‘daughter’ and the verb is ‘playing’.

· Because she loves to cook.
· Where the days are dark.
· Though she took away my dog.

Those sentences above are incomplete. By adding a main clause to the subordinate clause, it becomes a complete sentence.

· Although she loves to cook, she did not give up cooking.
· Where the days are dark, things are going to get horrific.
· Though she took away my dog, I would not go behind her to find him.

It comes under the category of dependent clause. This type of clause consists of a relative pronoun like whom, whose, who, which etc., or a relative adverb like when, where or why. The sentence forming will be an answer and not an interrogation. For instance,

· She like those bags which are comfortable as per her requirement.
· Jack loves Harley Davidson which looks stunning on road and off road.
· Ram would join the course when he is done with his exams.

These clauses are the one which are related to the nouns. It functions as a noun. It can also be a subject in a sentence. Noun clause also has relative pronouns. Though they belong to dependent clause, they do not stand alone, they too need an independent clause. For instance,

· What I had in the morning, was not enough to fill my stomach.
· I really want to know when she leaves the college.
· Adrian has no clue why his son is acting so weird. 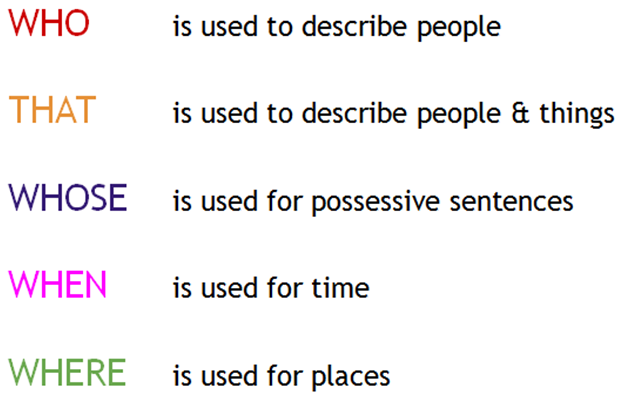 With the above information about the clauses and its types, you come to know how important it is to learn English and how you can attract the reader to read more. Joining an online spoken English course can help you improve your English overcome these issues and master the language.

1) Singular and plural nouns including irregular plural nouns
2) Dos and Don'ts of Public Speaking.
3) How to ask your boss for a promotion in fluent English?
4) How to Write a Resume for a Job?
5) Basic coordinating conjunctions