Introduction to the Diffraction of Light

Diffraction is a process that a wave undergoes when it encounters an obstacle whose size is close to its wavelength. The amount of bending depends on the size of the wavelength of light relative to the size of the opening. When the opening is much larger than the light's wavelength, the bending will be almost unnoticeable. However, when the two are closer in size or equal, the amount of bending will be considerable, and will be easily seen with the naked eye. Diffraction can be described as the apparent bending of waves around small obstacles and the spreading out of waves past small openings. Diffraction occurs with all waves, including sound waves, water waves, and electromagnetic waves such as visible light, x-rays and radio waves.

Huygens' Principle is based on this process.

Huygens’ Principle states that ”Every point of a wave front may be considered the source of secondary wavelets that spread out in all directions with a speed equal to the speed of propagation of the waves.”

When light goes through an aperture (an opening within a barrier) every point of the light wave within the aperture appears to create a circular wave that propagates outward from the aperture.

The aperture, therefore, can be thought to create a new wave source, which propagates in the form of a circular wave front. The center of the wave front will have greater intensity, with the intensity fading as one approaches the edges. This hypothesis explains the observed phenomenon of diffraction, and why light that passes through an aperture does not create a perfect image of the aperture on a screen. The edges "spread out" based on the principle that Huygen enunciated.

The effects of diffraction are regularly seen in everyday life. The most colorful examples of diffraction are those that involve light; for example, the closely spaced tracks on a CD or DVD act as a diffraction grating and therefore form the familiar rainbow pattern we see when looking at a disk. Diffraction in the atmosphere caused by small particles can cause a bright ring to be visible around a bright light source like the sun or the moon. A shadow of a solid object, cast from light from a compact source, shows small fringes near its edges. 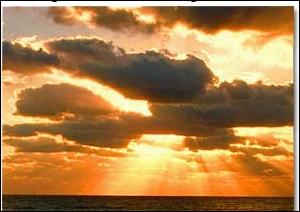 An example of this property is the shadow. If observed carefully, the edges of shadows are not solid, but slightly fuzzy.

Twinkling stars are another example of diffraction of light. As light from stars passes through the earth's atmosphere, which is laden with water vapor, the light bends around the water droplets causing the twinkling effect. The light waves become brighter or dimmer and the colors constantly change due to amplifications or cancellations caused by interference.

Want to know more about diffraction? Click here to schedule a live session with an eAge eTutor!