A group of words with subject and predicate and that forms a part of a sentence is called a clause.

• He could not go to school because he was sick.

In this sentence, there are two clauses and they are
1) He could not go to school
2) Because he was sick. 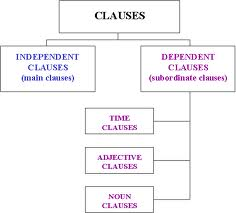 Clauses can be classified as:

A dependent clause has a subject and a verb but it cannot stand on its own. It depends on the main clause in order to have a complete meaning. 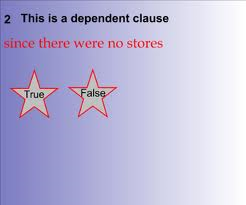 • She failed because she did not study.

The main clause or independent clause can stand on its own and does not depend on any other clause to complete its meaning. It also has a subject and a verb.

• We missed the train because we were late.

In this sentence we missed the train is the main clause. It stands on its own and does not depend on any other clause in the sentence.

Relative clause also known as adjective clause does the function of an adjective in the sentence. It is introduced with a relative pronoun or a relative adverb and it has a subject and a verb.

• Do you know the old man who is chatting with Meena?

In this sentence, who is chatting with Meena is the relative clause.

• Tom is the boy who taught me how to play football.

Here who taught me how to play football is the adjective clause.

• This is the computer which I bought yesterday.

Here which I bought yesterday is the adjective clause.

Like an adverb, an adverb clause does the work of an adverb in a sentence. It is a dependent clause as it cannot stand on its own.

• After he reached office, he called his mother.

Here after he reached office is an adverb clause.

Different kinds of adverb clauses are discussed below:


Note that words like after, before, so that, because are used to introduce the adverb clauses. These words are called subordinate conjunctions.

Like a noun, a noun clause performs the action of a noun in a sentence. It can play a role of subject, object of a verb, or object of a preposition, subject complement. It answers questions like “who” or “what?” Noun clauses are often introduced by words like that, why, whom, what, how, where, whoever, when.

• You should learn from what you did.

In this sentence, what you did is the object of the preposition.

• Ram did not understand what Ramesh told him.

In this sentence, what Ramesh told him is the object of the verb.

Difference between Phrases and Clauses

A phrase is a group of words that do not contain subject or predicate.

• The man lived in the woods.

In the woods is  the phrase in the sentence. It does not contain a subject or predicate. It is just a group of words and cannot stand on its own.