What is Degree of comparison?

Degree of comparison is used when we compare one person or one thing to another. An adjective has three forms called

degrees of comparison. They are:

This is most simple or basic form of adjective. It is positive because it does not relate to any superior or inferior quality. It talks about only one person or thing.

This is used to denote the mere existence of some quality. Here no comparisons are made. 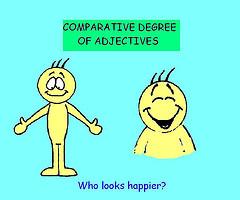 This is a form of adjective or adverb which denotes the degree or grade by which a person or thing has a property greater or less in extent than that of another. This shows a higher degree of quality that is present in the positive degree. When two sets or things are compared, this can be used. 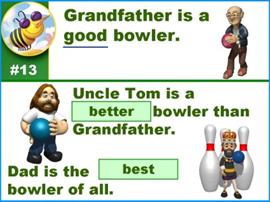 This is the form of an adjective that indicates that the person or thing modified has the quality of the adjective to a degree greater than anything it is being compared to in the given context. They are typically formed with the suffix –est or the word most. Here the definite article or possessive pronoun is placed before the comparative. It is the extreme degree of comparison. We use superlative degree when we compare more than two persons or things.

Example:
•    This is the tallest building.
•    Mona is the brightest girl in class.

Rules of comparison of adjectives

Here less than and the adjective is used.
Example:
•    It is less warm tonight than it was yesterday.
•    Sam is less thin than Sandy.

The least of (or in) and the adjective can be used.
Example:
•    I am least interested in her business.
•    Yesterday was the least hot day of the month.


4.    Comparative and Superlative of Superiority.

Monosyllabic adjectives form their comparative and superlative by adding er and est to the positive degree.
Example:
•    Hot hotter than the hottest.


Adjectives with more than two syllables form their comparative and superlative by putting more and most in front of the adjectives.
Example:
•    important more important than the most important

a.    Adjectives ending with -ed, -ing, -re, -ful and -ous and those with stress on the first syllable take more and most.

b.   Adjectives ending in er, le, ow and those with stress on the second syllable add er and est to the positive degree.

Example:
•    bright brighter than the brightest
•    Clever cleverer than the cleverest


Adjectives ending in some and the words cheerful, common, cruel, pleasant, civil, quiet may be compared by adding er and est or by more and most.

c) Adjectives ending in Y are preceded by a consonant.
Change Y into I before er and est.

a.    Gradual increase
Example:
•    Life is getting more and more difficult.
•    Supply is getting lesser and lesser.


What is the difference between comparatives and superlatives?

Want to know more about Comparison of adjectives? Click here to schedule a live help with an eTutor!