When To Use Although & Though. - eAge Tutor

When To Use Although & Though.

The two words, although and though, probably are the words with same meaning. They both produce the meaning “in spite of something”. Both the words are considered as subordinating conjunctions, so the sentence involved is a subordinate clause.

Although is used more often for a formal situation than though, but both are used in writing a formal or informal application on a regular basis.

1) Recovery of a boy is gaining momentum though the installment for his operations are yet to be paid by his guardian.
2) Mary married Tom although she did not love him.
3) Although Christi was a genius, she did not receive the scholarship.
4) Utsav passed the preliminary exams though he was busy with his photoshoots.
5) Though Ronaldo hurt his knee in the previous game, that didn’t stop him from scoring a hat-trick.

The sentences can also be written or said with 'though' at the end of it.

1) Jack loves ice-cream, decided not to have it, though.
2) I did not like cellphone, I liked its program, though.
3) He likes to sing in front of the crowd, opted not to do it, though.

'THOUGH' has different uses. Though is also a conjunction because ‘though’ brings a contrasting touch to the sentences.

“Even though you know nothing about him, accept it.”

Here is a formal conversation between two people and way of expressing a sentence with the involvement of the word ‘though’.

1) He paid the form for the admission, I rejected him, though.
2) I like the sweater, I decided not to buy it, though.

Though is also an adverb. The word 'though' is used alongside ‘however’ for an equivalent less formal sentence. We add both these words when something in the sentence leads to a contradiction. For example, “I gave my best in the interview, however my luck was out of favor and they did not pick me.”

1) This weekend was fun, though, theaters were packed.
2) I’m sorry I cannot stay for dinner. I will have a coffee, though.

'ALTHOUGH'  also is used as a conjunction. ‘Although’ is used in the initials of the clause and is always preferred over ‘though’ in the beginning.

1) Although the weather was not suitable, 30 people were still working in the office.
2) Although some criticized him for his performance, you cannot deny his ability to win games. 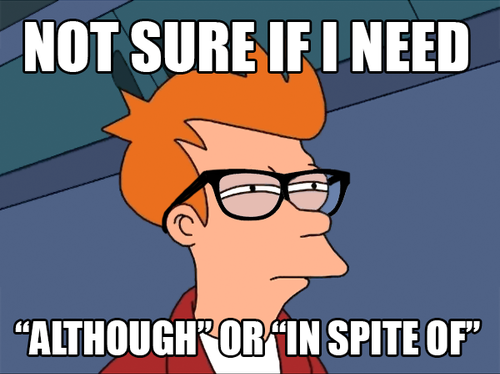 Some errors do occur while using ‘although’. One common mistake is using ‘but’ in the same sentence as ‘although’ which should be avoided.

“Although Simon failed in his first attempt, but he never quit achieving.” This sentence is completely incorrect. The correct one is,

“Although Simon failed in his first attempt, he never quit achieving.”

Understand the basic coordinating conjunctions and you will get to know their difference and usage within every sentence. Learning them is an essential part to improve English. You can join an online spoken English course to get a grip over the language and learn the basics of grammar simultaneously.

1) 5 Benefits of learning English for a Tour Guide.
2) Why English is considered an International Language?
3) Why do We Need to Learn English?
4) How to impress the interviewer and answer effectively in an interview?
5) IELTS Preparation – Things to Know.