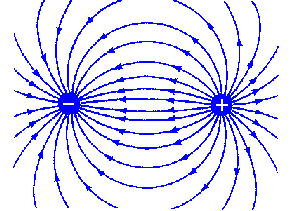 Field lines of an electric dipole, separated by a distance d.

An electric field produced by a dipole is known as a dipole field.

Let +q and -q be equal and opposite point charges separated by a small distance 2l. The strength of an electric dipole is measured by a vector quantity known as the electric dipole moment

, which is the product of the charge and the separation between the charges. That is,

is always from negative to positive. The SI unit of a dipole movement is the Coulomb-meter.

Important Points:
Charge (+q) and (-q) are called the poles of the dipole
The displacement vector always flows from a –ve charge to +ve charges
The straight line l joining the two poles is called the axial line
The perpendicular bisector of l is called the equatorial line.

Some of examples of electric dipoles are HCl and H2O.

There may be two or more atoms joined to form a single molecule. Every atom consists of a nucleus which is positively charged and electrons which are negatively charged. Both nucleus and electrons are rotating. At the middle of the atom both positive and negative charges coincide which makes an electric dipole moment that is zero.

Want to know more about electric dipoles? Click here to schedule a live session with an eAge eTutor!