A guide to determiners - eAge Tutor

A guide to determiners

An important role in English grammar is played by determiners ,the words that appear at the beginning of the noun phrase. They go with the word ‘determine’, as they identify whether the noun phrase is general or specific. They bring out the reference that is made by a noun. 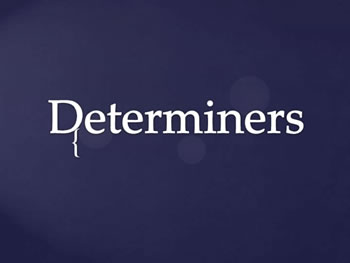 There are different types of determiners. Let us discuss them one by one.

Articles are divided into two categories, i.e., indefinite and definite article. There are three articles: ‘a’, ‘an’ and ‘the’.

‘A ‘and ‘an’ are referred as the indefinite articles. They are used to refer some group and also  a person. For example,

· He is an Argentinean striker.
· The joker creates a lot of chaos.

‘The’ belongs to the definite article category. It is used to refer to something that has already been mentioned and also refers to the group of people or a group too.

· The man was responsible for the downfall.
· The Americans had always been stronger.

Demonstratives show the relationship between the speaker and the object or a person.  It makes use of terms, such as this, that, these and those, to establish the relationship. Example:

· This is a nice cup.
· Is that Michael’s bike?
· Those flowers are so beautiful.

These determiners refer to a group of people or things and to individual members of the group. They show how the things are dealt in a sentence by getting shared. You will find words like ‘all’, ‘both’, ‘either’, ‘neither’.

· Both of them escaped the war.
· Either he was the culprit or the person with him.

This type of determiners leads the determiners in a noun. It describes a portion of the whole sentence.  It has three parts, namely:

These consist of words like twice, double, four times, etc.

“Your mother called you three times( thrice) this evening”.

“They are yet to cross  three-fourth of the road”.

Words like such, rather, quite are the words included in intensifiers.

· You are such a disgrace.
· The weather is quite normal this year.

Hope the above information gives you a clear idea of determiners. To improve your English speaking as well as writing skills, it is important to learn grammar. You can enroll in an online spoken English course to master your knowledge of English grammar.

1) Five Grammar Rules you should be breaking.
2) When to use the articles - a, an, the?
3) Who or Whom: Learn the Right Usage with Examples
4) What are vowels and Consonants?
5) What are words with similar meaning /opposite meaning to another word known as?