Introduction to Emfs and Internal resistance

EMF is the rate at which energy is drawn from a source that produces a flow of electricity in a circuit and is expressed in volts. EMF is another term for electrical potential, or the difference in charge across a battery or voltage source. For a circuit with no current flowing, the potential difference is called EMF.

Electrical sources that convert energy from another form are called seats of EMF. In the case of a complete circuit, such a source performs work on electrical charges, pushing them around the circuit. At a seat of EMF, charges are moved from low electrical potential to higher electrical potential.

What is Internal Resistance?

Usually voltmeters are made such that they draw very negligible current,
so the overall current in circuit is I, and current through voltmeter=0.The EMF of battery(E) will then drop across each resistance

A representation of a battery with internal resistance. 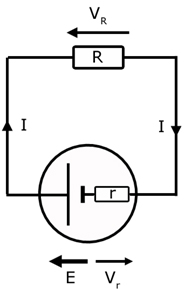 We can obtain important equations for E and r by considering a cell with resistance in a circuit.

by summing p.d. around the circuit,

Note, VR is called the terminal p.d. . That is the p.d. across the cell when it is delivering current.

Want to know more about EMFs and internal resistance? Click here to schedule a live session with an eAge eTutor!