DNA is the genetic material which decides the traits in organism was a mystery in early days. Many biologists/scientists were working on various areas of research to find it out how genetic information was passed along hte generations. It was discovered and approved by all biologists after a long research processes. Let’s now discuss the various scientists, their research and contribution to the world of biology.

•    The Swiss physician Friedrich Miescher discovered a microbe in the pus cells from the thrown out surgical bandage in 1869.
•    He found that it was residing in a cell nucleus.  He named it as ‘Nuclein.’  As it resided in the nuclei of cells, he called it "nuclein".

•    That the traits of the "smooth" form of the Pneumococcus, a bacteria, could be transferred to the "rough" form of the same bacteria by mixing killed "smooth" bacteria with the live "rough" form was discovered by Frederick Griffith in 1928. That DNA carries genetic information is proved by him.

Identified the DNA's role in heredity in 1952.

These scientists took a X ray diffraction image of the DNA double-helix DNA in 1952 and found that the DNA bases are paired.

Information obtained through private communications from in the previous years was proved by them. Double helix configurations were established by Chargaff's rules.

The replication mechanism of DNA is confirmed by these scientists in 1958 through the Meselson–Stahl experiment.

Khorana,  Holley and  Nirenberg:
They identified the genetic code.

Watson and Crick model of DNA 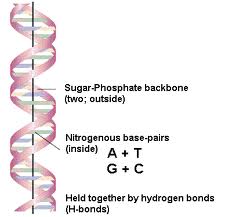 In 1962, after Franklin's death, Watson, Crick, and Wilkins jointly received the Nobel Prize in Physiology or Medicine.  DNA is a genetic material which can be passed as a trait to the next generation. Not only characteristics, but also diseases and base modifications can be passed on to the offsprings. DNA has 4 nucleotides and with the support of sugar, phosphate and hydrogen bonds nucleotides are placed in the double helix.

In 1957, Crick explained about the central dogma of molecular biology. This gives the information and relationships between DNA, RNA, and proteins.