Nucleic acids are biological macromolecules present in all living organisms.

These are responsible for the storage and transfer of genetic information from generation to generation.

RNA is present in all organisms-prokaryotes, eukaryotes, viruses and viriods.  In some viruses, it is the genetic material.

3) A nitrogenous base (either purine or pyrimidine)

Purine bases are adenine and guanine. Pyrimidine bases are uracil and cytosine, The pyrimidine thymine is absent. The nucleotides are linked together by phosphor-diester bonds.

RNA molecule is single stranded.  However, evidence indicates that there may be regions in the molecule where it folds back on itself to form helical segments held together by complementary base pairing i.e., A pairs with U by 2 hydrogen bonds and C pairs with G by 3 hydrogen bonds.

There are two types of RNA namely genetic RNA and non-genetic RNA.

The RNA is some viruses carry hereditary characters from generation to generation.  It is called ‘genetic RNA” (genetic material).  In these viruses, DNA is completely absent.

Function: It has the information in it for functions like reproduction and structural organization.

The non genetic RNA is ribosomal RNA (rRNA) and transfer RNA (rRNA).  These are involved in protein synthesis.

mRNA was discovered by Volkin in E. coli.  The name mRNA was coined by Jacob and Monod.  It is the largest in size among all RNA types and accounts about 5% of RNA in the cell.  It is a single stranded long linear molecule without base pairing. It has an average of 900-1500 nucleotides.  Most mRNAs have a very short life.  mRNA contain codons (A codon is asset of three nucleotides which specify a particular amino acid).  The sequence of codons on mRNA determines the sequence of amino acids in a protein molecule.

Function: It acts a messenger to carry the genetic information from DNA to the cytoplasmic sites of protein synthesis, namely the ribosome.  Hence the name messenger RNA. 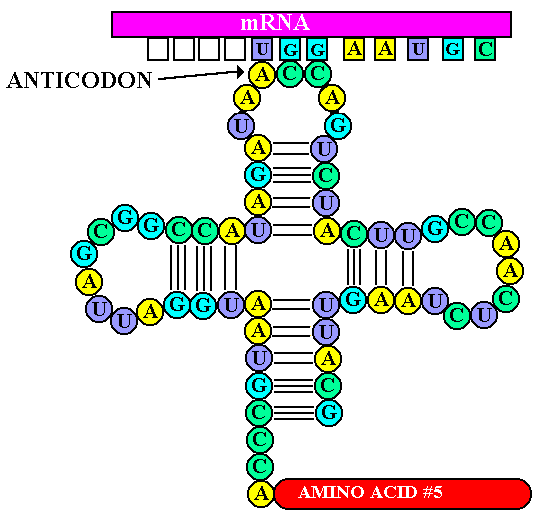 Robert W.Holley and colleagues in 1965 proposed “clover leaf model” to describe the two dimensional structure of a tRNA molecule.  Holley shared the 1968 Nobel Prize in Physiology and medicine for this work.

tRNA constitutes  15% of RNA in the cell.  It is the smallest nucleic acid with approximately 75-85 nucleotides.  Its life span is short. 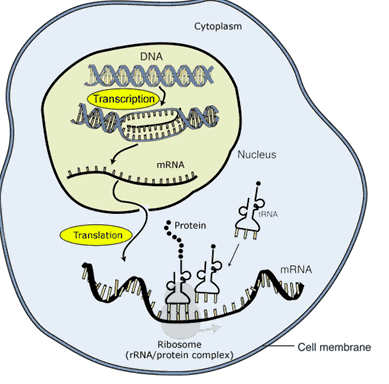 Function: tRNAs carry amino acids from amino acid pool to the sites of protein synthesis and recognize the codons of the mRNA.


What is the difference between a DNA and the RNA?

Want to know more about DNA? Click here to schedule a live help with an eTutor!