An ellipse is a plane curve that results from the intersection of a cone by a plane in a way that produces a closed curve. Circles are special cases of ellipses, obtained when the cutting plane is orthogonal to the cone's axis. An ellipse is also the locus of all points of the plane whose distances to two fixed points add to the same constant.

Equations of an ellipse 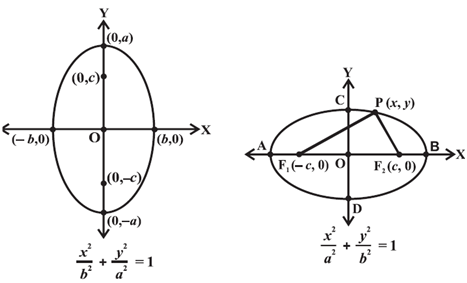 Now, we will derive the equation for the ellipse with foci on the x – axis.

Let F1 and F2 be the foci and O be the midpoint of the line segment F1F2. Let O be the origin and the line from O through F2 be the

positive x-axis and that through F1 as the negative x-axis.

Let P(x, y) be any point on the ellipse such that the sum of the distances from P to the two foci be 2a so given

To summarise, here are the observations from the standard equations of ellipse:

Latus rectum of an ellipse is a line segment perpendicular to the major axis through any of the foci and whose end points lie on the ellipse.