These forces stick or bind the atoms or molecules together in different state of matter. 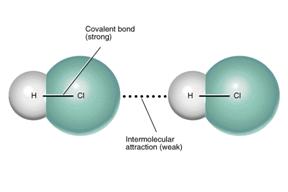 On the basis of type of compound, the intermolecular forces are divided into two categories:

Ionic compounds are made of charged ions. The force that develops due to the presence of opposite charges on ions is referred as electrostatic force. The electrostatic or ionic force is the strongest force among the intermolecular forces.

Covalent compounds are formed by sharing of electrons among the participating elements. Three types of intermolecular forces are present between the molecules of covalent compounds. They are

When interaction between the molecules is very weak the molecules do not bind with each other and form solids or liquids. By reducing the temperature, thermal energy is reduced which binds the molecules in a specific order to make it solid or liquid.  Think about water condensing on the outside of a cold glass—this is water from the air cooling and becoming a liquid.  If you further reduced the temperature, you would create ice—a solid!

Effect of Intermolecular forces and thermal energy on states of matter

The three state of matter formed are:

Why gases do not liquefy on compression only?

In case of gases, the interaction forces between the molecules are very weak so they are not tightly bound to each other. The molecules are free to move. On compression, the molecules of gas come close to each other but do not liquefy. However, on reducing the temperature, the kinetic energy, or random motion of molecule is reduced thus they are easily liquefied by compressing and lowering the thermal energy.

What are the effects of intermolecular forces and thermal energy on states of matter?

Try to answer. Still need help? Want to know more about it? Click here to schedule live help from a certified tutor!