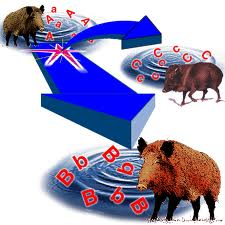 A species is a group of individuals that actually or potentially interbreed in nature. In this sense, a species is the biggest gene pool possible under natural conditions.
The definition of a species as a group of interbreeding individuals cannot be easily applied to organisms that reproduce only or mainly asexually. Example: Bacteria which reproduces through binary fission.
The process of formation of one or more new species  from an existing species is called speciation. It occurs when a population splits into two or more geographically isolated populations and these isolated populations divert from parent population to form new species and cannot reproduce with each other. These sub-populations become reproductively isolated and from new species.

Speciation is a lineage-splitting event that produces two or more separate species.


The branching points on this partial Drosophila phylogeny represent long past speciation events.

Some fruit fly larvae were washed up on an island, and speciation started because populations were prevented from interbreeding by geographic isolation. 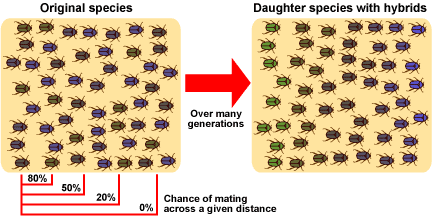 small population isolated at the edge

within range of ancestral population

Beetles is the best example to understand this concept:

•    Number of beetles feeding on bushes over mountain rages
•    Population size increases
•    (Sub populations)
•    Most of the beetles feed there only   --Few beetles start feeding on bushes in neighborhood
•    Reproduction occurs within this sub-population.Most of the reproduction in the same area
•    Migration of beetles
•    Gene Flow continues
•    Large river exists in between two sub-populations
•    Gene flow stops

Above example of speciation shows:

1.    Large population of beetles occurs in mountain range.
2.    Few beetles start feeding in neighborhood.
3.    Gene flow continues in two places.
4.    They may get isolates at larger distances because of existence of river.
5.    Gene flow decreases finally and stops
6.    Two subpopulations change with time because of genetic drift and natural selection.
7.    Later they become reproductively isolated
8.    Two new species come up.
9.    This can occur as a result of change in chromosome number.
10.   Micro evolution, is very important. This means that the changes may be small but significant.

What is the difference between natural selection and speciation:

Want to know more about speciation? Click here to schedule a live help with an eTutor!