The concept of biological species was worked by Ernst Mayr in 1940:  a group of species in a population will interbreed and form an offspring which is fertile.   They don’t mingle with nature and breed with other species. They don’t interbreed because its mechanism of reproductive isolation.

Pre-zygotic and post-zygotic are the two forms of reproductive isolating mechanisms.

Behavior is also an isolating mechanism. Here one species may not recognize the other.  For example wolfs are different from dogs but they are wild and have certain patterns in common. However, their behavior is different enough to isolate them from each other—wolves will kill and eat dogs, for example.

Mechanical isolation deals with reproductive organ mechanisms. It acts a pre-zygotic barrier by stopping sexual intercourse between two different species. We can say that the artificial selection can overcome the above behavioral isolation mechanisms. However, gametic isolation and prezygotic barriers cannot be overcome by any means. Gamete isolation is where the gametes of the two species are—incompatible chemically, thus preventing fertilization.
Prezygotic and postzygotic isolating mechanisms give the identity of the species throughout millions of years. It is accomplished through evolutionary process. 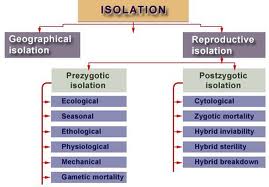 Isolating mechanisms can be understood with better example. The wolf and dog have different gene pool. Wolves are more aggressive than dogs. This provides a behavioral barrier yet their patterns are similar.  This is a good example of behavioral mechanism. In the same way female horses and a male donkey, when crossed, gives a mule and is possible only through hybridization.  This is due to post zygotic isolating mechanism.

What is the difference between  pre-zygotic isolation and post-zygotic  isolation:

Want to know more about Reproduction isolation? Click here to schedule a live help with an eTutor!