Electric charge is a physical property of matter which causes it to experience a force when near other electrically charged matter. Classically, electric charge comes in two types. These are called positive and negative.

Charge is the fundamental property of forms of matter that exhibit electrostatic attraction or repulsion in the presence of other matter.

The electric charge on an electron is very small and it is NEGATIVE: -1.6(10)-19 Coulombs. The protons thought to be at the center of atoms have the same amount of charge as the electron except it is a POSITIVE electric charge: +1.6(10)-19 Coulombs. If an object has the same amount of positive and negative charge the NET CHARGE on the object is the sum of the two kinds of charge and adds to zero, and we say the object is electrically neutral. So if an object has a number of protons equal to the number of electrons its net charge is zero. (All atoms have a net charge of zero, but ions can have a positive or negative charge depending on whether they have more protons or electrons.)

The Law of Conservation of Charge

The Law of Conservation of Charge states that the net charge of an isolated system remains constant.

If a system starts out with an equal number of positive and negative charges, there¹s nothing we can do to create an excess of one kind of charge in that system unless we bring in charge from outside the system (or remove some charge from the system). Likewise, if something starts out with a certain net charge, say +100 e, it will always have +100 e unless it is allowed to interact with something external to it.

Charge can be created and destroyed, but only in positive-negative pairs. 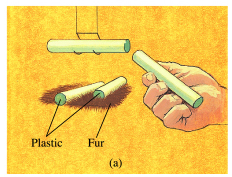 Charge could be transferred between two objects by rubbing them together.

In the diagram below, rubbing plastic and fur together results in electrons from the fur being rubbed off onto the plastic, leaving the fur positively charged and the plastic negatively charged.

The diagram below shows a process called "charging by induction" in which a neutral metal sphere is supported on an insulating stand. When a negatively charged rod is placed close to the neutral metal sphere the (negatively) charged electrons in the sphere are repelled to the far side of the sphere, leaving the atoms on the near side positively charged owing to their missing electrons. If we then connect a copper wire to the negative side of the sphere and an electrical ground some of the free electrons will flow into the ground. When we then remove the copper wire and the negatively charged rod what remains is a metal sphere with a uniform distributed positively charge.

Charging a metal sphere by the process of induction.

Although the charges (on the electrons) are tightly bound to the atoms in an insulator they are free to move slightly within the atom. This is called polarization.

If the comb is brought close to a neutral insulator, like a piece of dry paper, it will repel the negatively charged electrons in the atoms causing them to moving away slightly, leaving the protons without an electron closer to the comb.

Want to know more about Electric Charge? Click here to schedule live help with an etutor!