The subject matter of thermodynamics is based on three experimental laws, namely: 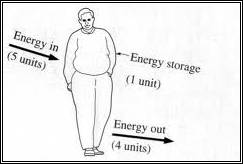 The First Law of Thermodynamics is the law of Conservation of Energy. It states that energy cannot be created or destroyed. Instead it is only converted from one form to another, such as from mechanical work to heat, or from heat to light.

Let a system in state A of internal energy EA absorb from the surroundings a certain amount of heat (Q) and undergo a change in its state to B. Let the internal energy in the state B be EB. The increase in internal energy Δ E of the system is given by the equation

If W is the work done by the system in the process, then from the first law, the net gain of energy (Q - W ) must be equal to  ΔE, the increase in the internal energy of the system. Therefore:

The second law of thermodynamics is formulated in many ways, as will be addressed shortly, but is basically a law which -- unlike most other laws in physics -- deals not with how to do something, but rather deals entirely with placing a restriction on what can be done.

It is a law that says that nature constrains us from getting certain kinds of outcomes without putting a lot of work into it, and as such, much like the first law of thermodynamics, is also closely tied to the concept of the conservation of energy.

The second law of thermodynamics precisely defines a property called entropy. Entropy can be thought of as a measure of how close a system is to equilibrium; it can also be thought of as a measure of the disorder in the system. The law states that the entropy — that is, the disorder — of an isolated system can never decrease. Thus, when an isolated system achieves a configuration of maximum entropy, it can no longer undergo change: It has reached equilibrium. Nature, then, seems to “prefer” disorder or chaos. It can be shown that the second law stipulates that, in the absence of work, heat cannot be transferred from a region at a lower temperature to one at a higher temperature.

The third law of thermodynamics:

The third law of thermodynamics is essentially a statement about the ability to create an absolute temperature scale, for which absolute zero is the point at which the internal energy of a solid is precisely 0.


Want to know more about thermodynamics? Click here to schedule a live session with an eAge eTutor!