Many different factors impact the population size, and it will be highly difficult to predict which factors are the most important.

There are two broad groups of factors:

The abiotic environment like temperature, water, pH, light, soil and pollution impact the population size. Successful and dominant species can adapt well to the environment.

But in moderate climate lots of species can thrive, and it will be a great competition between different species for food.

Tsunamis, Earthquakes  and other natural disasters can reduce the population sizes.

In the above graph it is clearly shown that during warm weather the species can mate.  With more reproduction chances, these cycles end with an increase in population. At the same time population would be decreased because of the less reproduction in cold weather.  Organisms that perish during these periods will only be replaced once reproduction resumes. 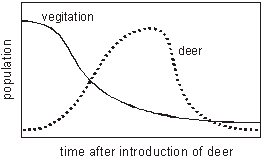 If two equally strong organisms grow separately they may show a moderate increase in their population. But if they both grown together in the same ecosystem, a dominate one will access the resources and the other population automatically start decreasing.  This can be demonstrated by growing two different species of the protozoan Paramecium in flasks in a lab.

Interspecific competition between
the two species of paramecium

Predation
If the population of the prey increases, the predator can access more food and the predator’s populations will be increased. But if they continuously feed on the prey, the prey population will decrease.

Predator with its prey

If a particular community affected with any disease, it will lead to the decrease in their population.

Want to know more about the fluctuation of population sizes? Click here to schedule live online session with e Tutor!